Other projects you're working on.

Yes, that was the Studillac before I tore it apart to make it badder ass!

What vehicle(s) do you drive?
62 cad convert and 66 mercury colony park

Ted in Olympia said:
I may be weird but I really like the look of this car. Also looks like a ton of fun on the ice. Kind of amazing it is still in one piece and not all rotted out. I have not seen 4 on the tree before, I wonder if any cars here ever had it?

Citroen id and ds have 4 AND 5 speed standard on the tree.
C

What vehicle(s) do you drive?
62 cad convert and 66 mercury colony park

I hate being bored. 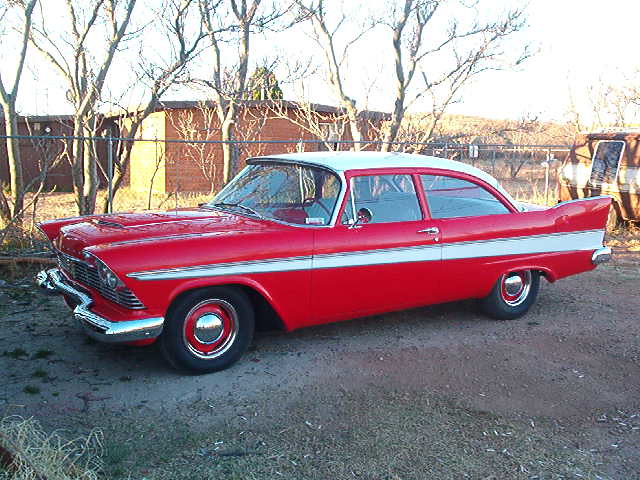 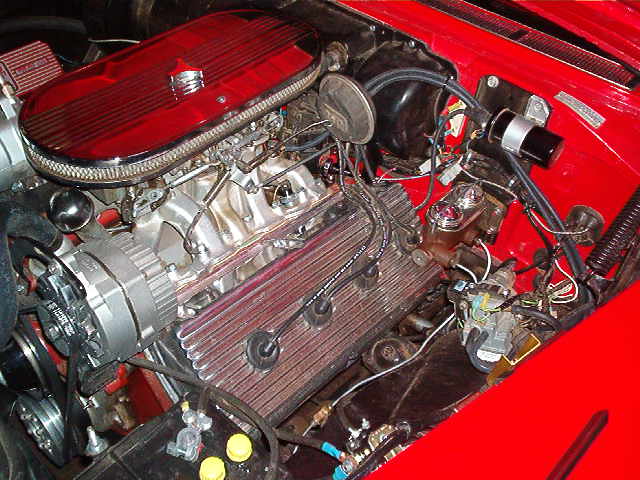 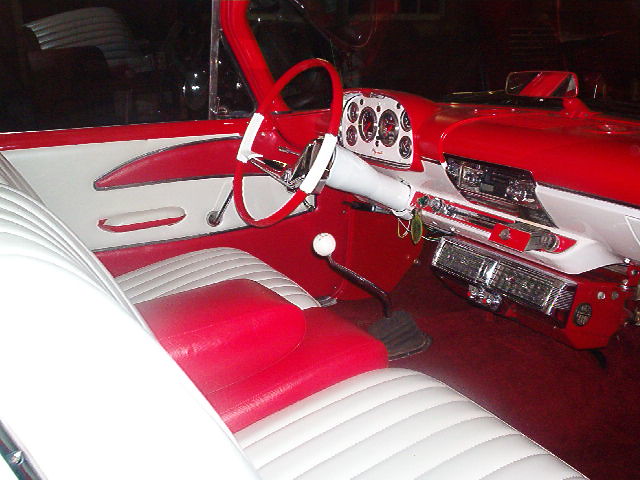 The car is fun to drive, but as age is catching up with me I wanted to redo a couple of things. So far I’ve redone the clutch linkage to slow down the engagement and take a bit of pedal effort out of it. The rear springs were starting to sag a little bit so they got a couple of additional leaves in them.


The next thing I want to tackle is putting power steering on it. The 50s era PS is huge. slow and has absolutely no road feel. I purposely built the car with manual steering for those reasons. So right now I’m in the process of seeing if I can retrofit a Saginaw steering gear in it. Of course the PS pump bracket I want to use that will work with my current pulley set up was made by PAW and they no longer exist.


Also on the to do list is the induction. The Tri-Power has been great and gets 20 MPG on the highway. I always thought I could pick up some more mid and upper range power with a bit more carburetion soooooo…….


I dug up an original 57 Chrysler intake and a pair of my favorite early 60s Cadillac AFBs to try on it. 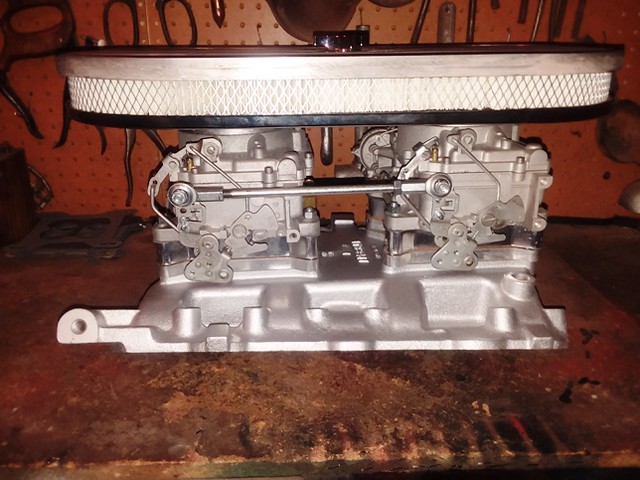 As long as I was building linkage, I also built a progressive set up. It will be interesting to see what the engine likes best (and how far in the dumper my mileage goes ). 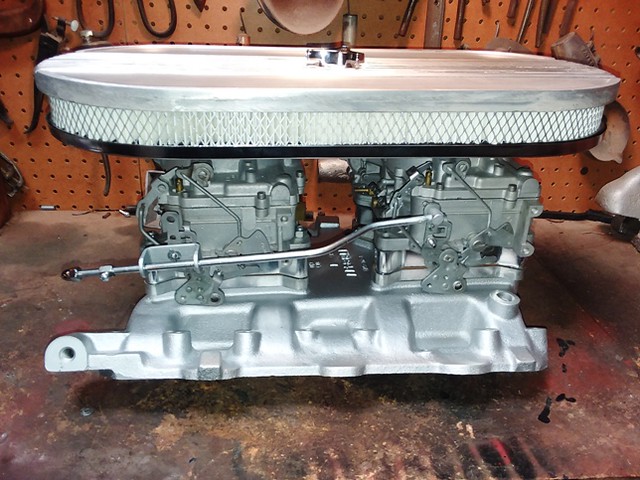 
Chrysler did some odd ball stuff over the years. You are correct that the 392 is a taller deck than the 331 and 354 HEMIs. Rather than make the heads interchangeable and casting up a wider intake like is common for most manufactures, the 392 had heads that were wider on the intake side than the 331/354s. Basically the intakes directly interchange and the heads don't.

Now that is a very cool old car!
Just wondering, would a larger area air filter help in the miles per gallon search.
Or maybe one of those "Gear Venders" overdrive units would most defiantly do the trick, but they are rather pricey!
8

Not to jump in or imply universal benefits but,
Larger air cleaner worked for me and lower rpm on;y works when the engine is happier there and of course, has ample enough torque to keep a minimal throttle angle at that speed..
Air cleaners and carbs are rated by the average or volume displacement and since engines pulse, they seem to like more breathing capacity than the averages would suggest.
Hoping for more dialog.
Hopefully didn't take the post over...

".....Just wondering, would a larger area air filter help in the miles per gallon search.
Or maybe one of those "Gear Venders" overdrive units would most defiantly do the trick, but they are rather pricey!....."

"........Not to jump in or imply universal benefits but,
Larger air cleaner worked for me and lower rpm on;y works when the engine is happier there and of course, has ample enough torque to keep a minimal throttle angle at that speed..
Air cleaners and carbs are rated by the average or volume displacement and since engines pulse, they seem to like more breathing capacity than the averages would suggest....."

Good points from both of you. As far as the air filter I'm a firm believer that bigger is always better. That being said, there is a pretty fair amount of filter area in this one......it's a knock off of the filter assembly (and uses the same filter) that Ford used on the Tri-Power 390 and 406 cars and the Dual Quad 427s. They used to offer a taller filter for these, but I haven't come across those in many years. I do have Mopar 6 Pack filter I could use, but for this car I don't really care for the way it looks. 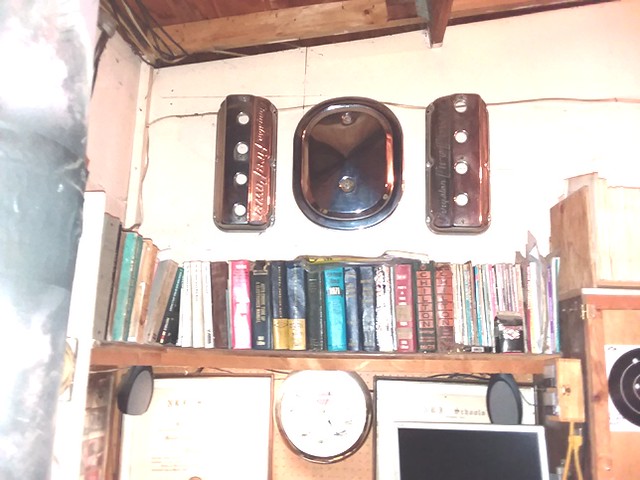 
As far as mileage, I can't really complain, as it's set up right now with the Tri-Power it get right at 20 MPG at 75 MPH with the AC on. I'm hoping with the dual quads to lose no more than a couple of miles per gallon.


Your right about lower RPM not necessarily equating to increased gas mileage. You need to see where the cam is happiest at. In my case I got really lucky with the cam selection and at 75 MPH I'm at about 2700 RPM and that seems to be the sweet spot for the car. Much below 2500 RPM it starts to get a big doggy, in part due to the cam, but I suspect also because of the large ports and valves.


The 4 speed in the car is the overdrive version of the NP A833. The gear splits kind of suck but it's a pretty good compromise and effectively turn the 4.10s into a 3.0 final ratio.


I did a build video on the car several years ago and recently posted it to you tube in case anybody wants to see it.

...very nice build, when you are tired with it let me know.

Thinking about buying this:

Location
Estonia (next to Russia)

Location
Estonia (next to Russia)

And the next infinity project - The ElGaZino. An illegitimate child of soviet GAZ53 and Chevrolet ElCamino

And yes, the shape came from ford

Been a while since I posted mostly because a bunch of stuff (life) kept me pretty much away from the shop and various projects. I had some family things I needed to take care of, had wrist surgery and then last year we put second house on the property.


Before all that I did get the dual quads on the 57 Plymouth.


and even got a PS pump bracket built and it and the pump mounted on the car. 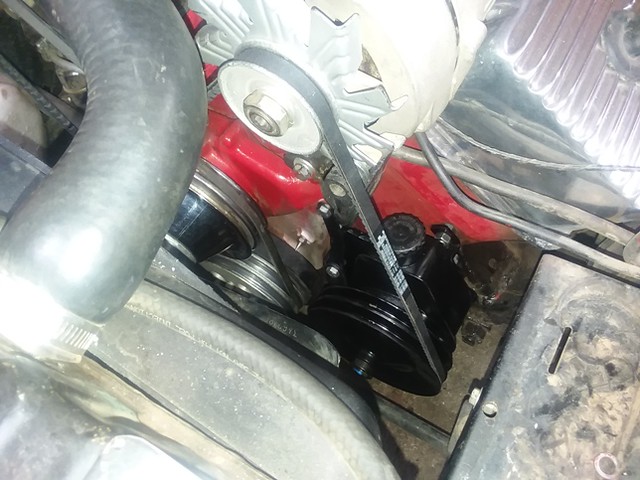 
I'd also spent a couple of months off and on working at figuring out a PS gear conversion. As luck would have it while I was healing from my surgery I came across an outfit that had just come out with a conversion kit specifically for the 57-8 Dodges and Plymouths. I ended up getting his first kit. 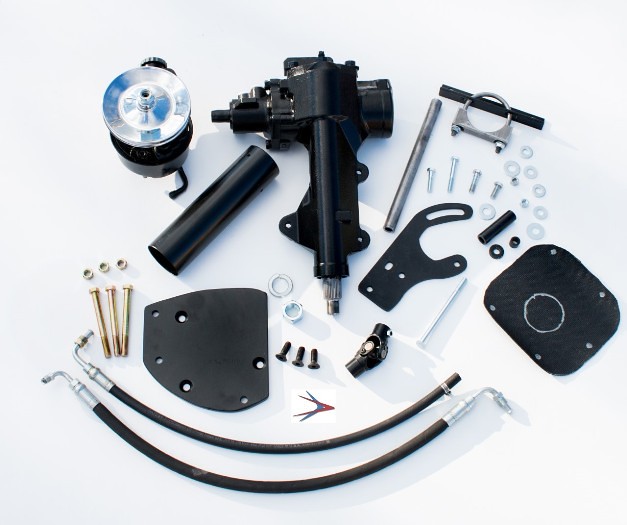 Of course the kit ended up sitting in the trunk for a bit over a year, but I finally got around to installing it a week or so ago.


Getting it in wasn't a lot of fun.......on the 57-62 Mopars the steering gear and column has to come out as a unit thru the passenger compartment.


The kit also wasn't designed to use with a manual transmission (which I knew before I bought the kit) so there were modifications required to make it clear the clutch linkage.


The biggest surprise ended up being the steering gear interfered with the big aluminum aftermarket valve covers. On the aluminum covers there is a lip that overhangs the head by at least 1/4" and a large boss for the rear valve cover bolt.


I really like the away the aluminum covers look on the car, but they are huge PIA to take on and off. The coolant has to be drained (the upper valve cover bolt holes go into the water jacket), the master cylinder has to be removed, and the heater blower and heater box has to be removed from the fire wall. Stock style valve covers fit without any of the issues (the factory used studs instead of bolts to hold the covers on) and I happened to have a spare set of the stock covers I'd set aside for another project. So in the end the 57 got a new set of valve covers and the aluminum covers will be recycled to the 37 Dodge.


Anyway when all was said and done the conversion was worth the time and effort and I really like the way the car drives with the new steering gear.


I even got it done in time to drive it back for the class reunion.........of course with the virus thing it looks like that may be cancelled or postponed. Depending on what happens with the reunion and the rest of the country, I'll probably still look at driving it back to Illinois sometime this fall.

I looked at ALL of the pictures and have to ask, who is that kid?

Doc Zinger said:
Guess I'll add one of my other projects to the list. Got this car a 1990 MB 560SEC last Jan and have been doing a few things to it to increase performance and just to screw around with it.

Biggest thing done so far was to replace the crap assed factory exhaust system for US(NA) cars with a duel exhaust all the way. Got a set of what they call euro logs to replace the crossover style manifolds and went from there. Used some mail order head pipes and some Magnaflow parts to come up with this. The only outside work done was weld up, constructing pipe between muffler and resonator. Sounds good, looks a lot better, and less weight. A few pics
Click to expand...

Been a while since I've posted on this forum, still got my '79 deville and need to do some work on it to get it back on the road.

Had to do some work on my other hobby car, my '90 Mercedes 560 SEC, a kind sole hit and ran the driver's side front end and left the mess to clean up. Car was totaled out by insurance guys and I got a $ 10,000 payout less deduct. Couldn't find anyone who wanted to work on it so I did what I could to get it fixed. Damage wasn't as bad as it looked I think the ins guys just didn't want to deal with it.
Took awhile to get things sorted out but just about ready for the road again, a few pics.....