Until this thread, I wasn't aware ( I lead a sheltered life ) that there were dome type pistons for the big chamber heads. :banghead: Would have been nice to have more than the 8.56:1 that I calculated in mine, like maybe around 9.8 instead....
S

What about the bore clearance? would it be an issue to set it tight like a n/a engine and add a mild turbo/spray setup?
8

You don't really set them "tight" on an NA engine anyways (for performance builds).
The piston and ring nomenclature gives recommendations based on material and usage, even boost. That's a good starting point.
Set them up for the turbo, No2 or boost now. It won't be an oil burner or wear quicker anyways, that's more or less a fallacy.
You're not going to put 50k miles the first year anyways.

The alternative is that if you set it up "tight" you will butt rings (tear piston apart), gall or seize the pistons...or have to tear it down and loosen things up when you add the turbo or ?
I've run many many engines (pistons, rings, and bores) set up more loose than most would admit and have never had any oiling, oil burning or wear issues.
I keep the top end relatively tight, depending...

Did the piston prep tonight according to Probes video they got on youtube. Found a few pieces of material in the pistons

This is one of the relieve holes in the ring land, The allen wrench is in there for contrast. You can see one of the maybe 10 pieces of metal that I had to chip off. Everything else looked good with the pistons, no other sharp edges. 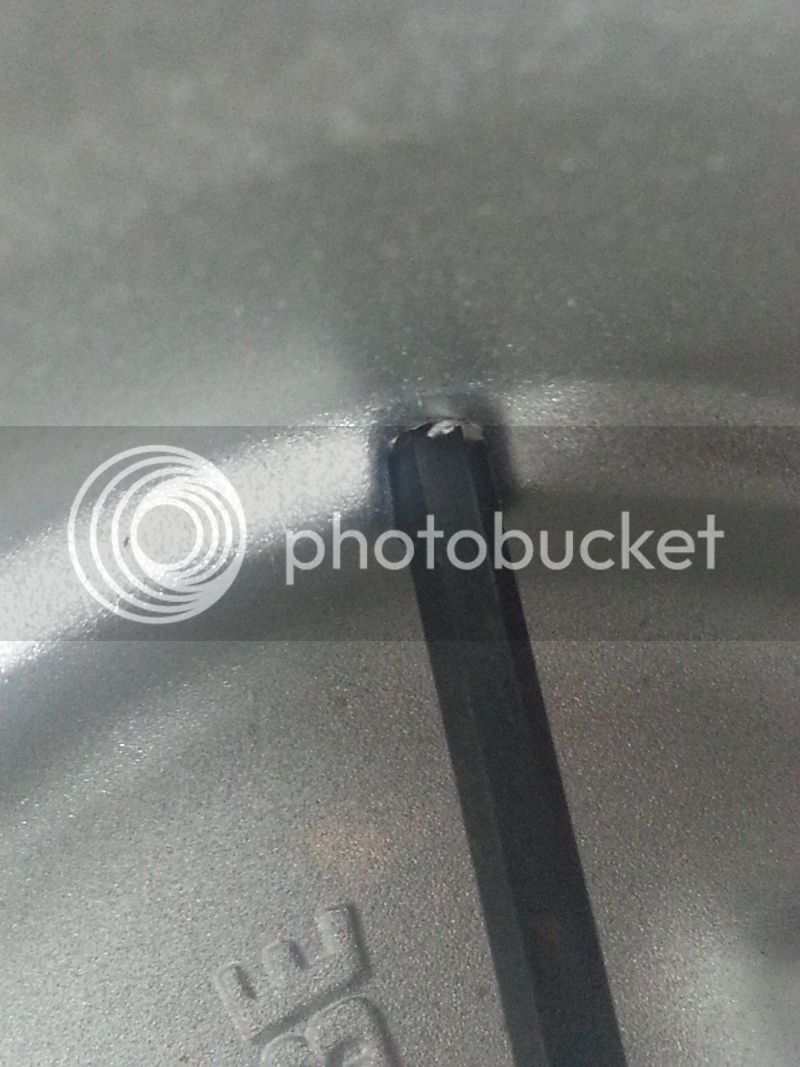 Also, these are the measurements that I got from the Bulldog intake, one side has been worked more then the other. I'll have more pics of the intake work later. 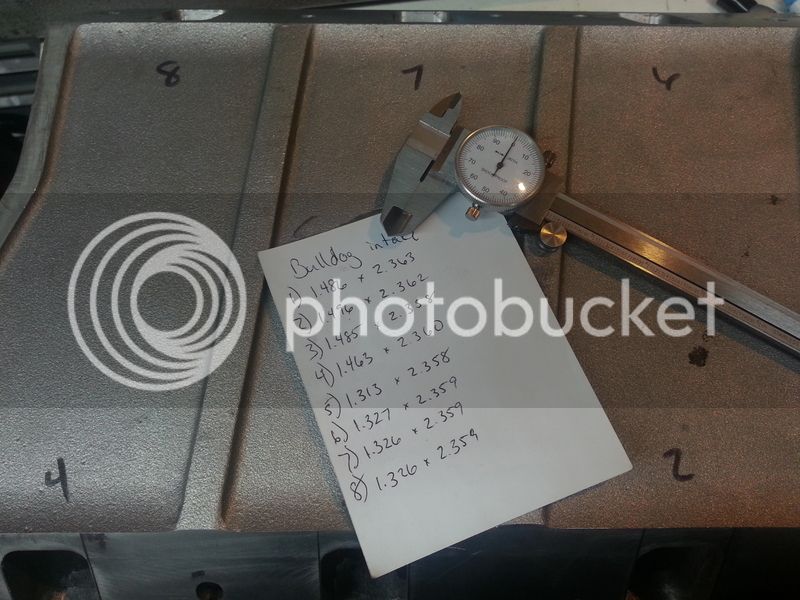 How would y'all go about cleaning the block/pistons/heads/intake one last time at home before assembly?
P

Not sure how other folks do it, but after the machine shop get done with my block & heads, I take it to the local coin car wash, and give it the works with the pressure wash & rinse. A can of WD-40 along to spray it it down until I get it back the the shop where the compressed air blows it clean before oiling the machine work areas etc before assembly....
S

Quick question, are the caps on correctly? Had it line honed and don't want to mess it up. 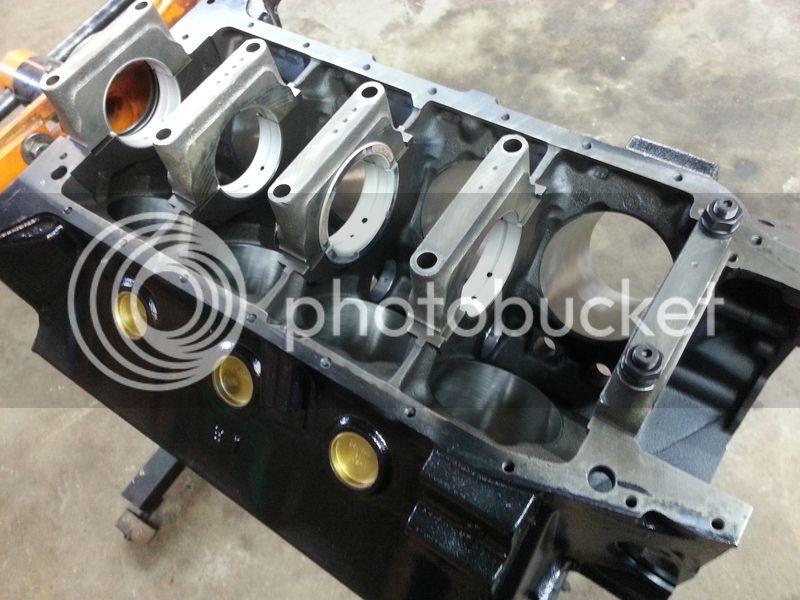 Edited, found the answers to the other questions I had. Hand tighten the studs, torque to 110lbs with Arp lube.
S

Felt good enough to put the crank in with the clearances I have. Main journals measured at .0022-.0028 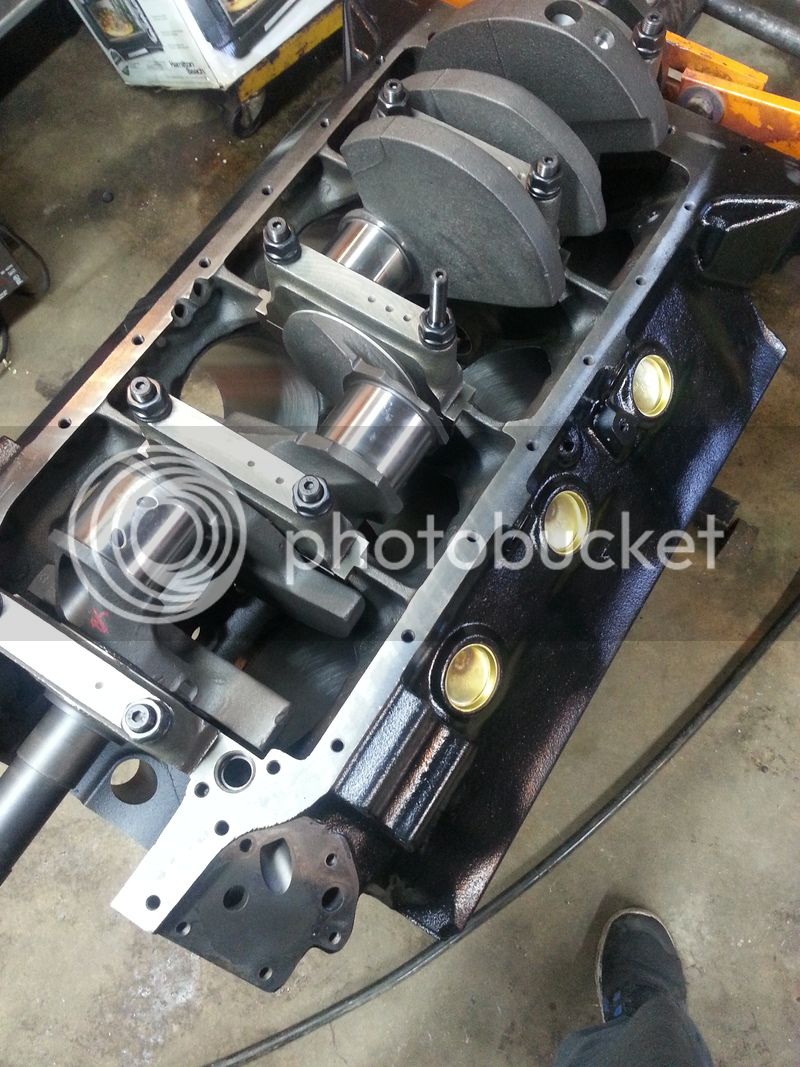 Looks nice. I see copper on the thrust, so I assume Clevite. Did you have to sand it to get thrust clearance? I have had to do so on every caddy engine that I've done.

That's pretty tight. :twocents: I might break it in easy. [yea, right lol ]

Not sure the brand, ill look again. Ended up taking it apart because it has a tight spot when rotating. Gotta call the machine shop and find out what they torqued the studs to when they line honed. Thanks for reminding me of thrust clearance, didn't even check it when it was together. 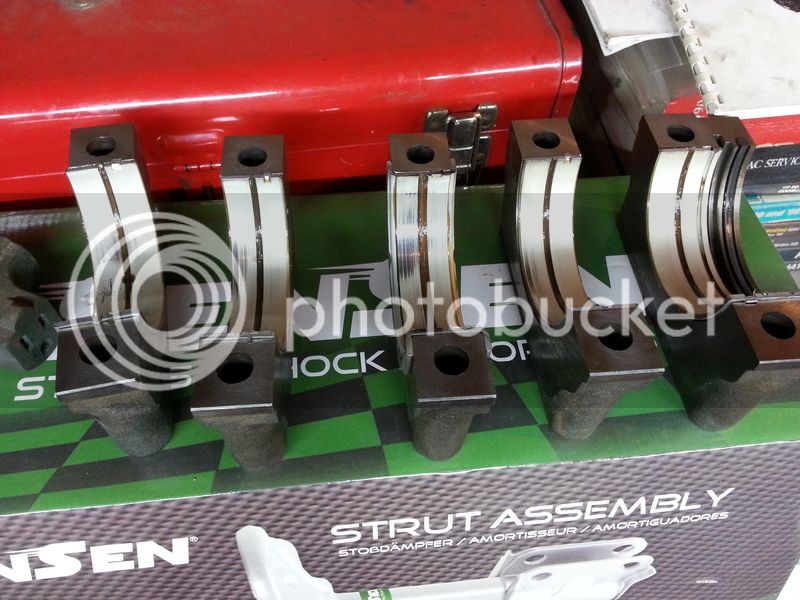 The needle didn't move at all on all mains so I know the crank is good. Talking with Mad, I think we got it down to cap distortion when tightened. 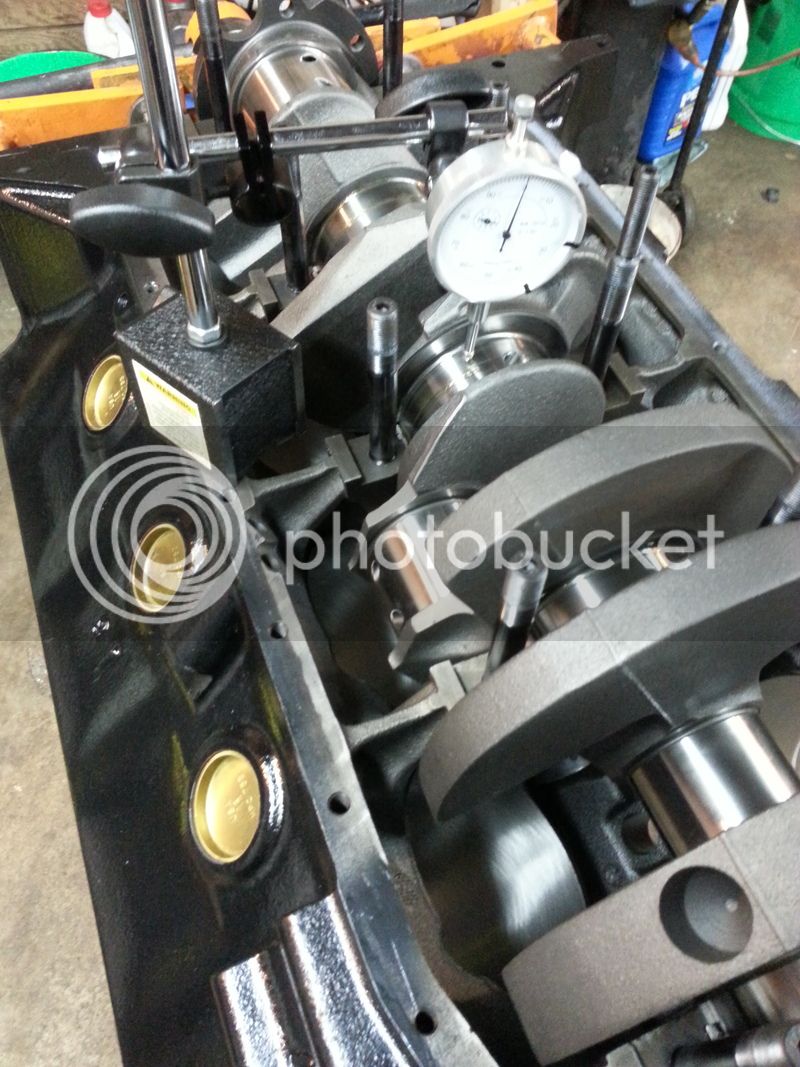 Sam, i doubt you'll get anything out of the machine shop for that "tight spot". I had more than that on mine. Probably on 3 caps, and i checked my clearances incessantly. After the breakin, the bearings looked identical. You can see the pix in my thread if you want.

Definitely confirm the torque of the main studs during line honing, but other than that, dont lose too much sleep over it.

If the crank binds ..it's a problem...
After the break away effort (the force required to get it moving )
The effort should remain close to the same thru the rotation..IMO..

If you back off the torque to say 1/2 and it dosent it is from distortion..
and the shop either didn't torque it the same as you or they didn't
hone it true .. provided they sized it right


If may be ok but I would try to get it right now rather then find out later
it was no good.

Yes gettinv the shop to correct or admit they f $@!! Up is darn near
if not impossible
M

Agreed, binding is not acceptable.

in my case, it was actually the bearing shells. You can see in this thread, we measaured each bearing 6 times, and the thrust was the most problematic. It was tight on half the shell. A couple of other shells had the same issue. The measurement repeated too. We tried cleaning the back side, setting and resetting, and even heating up the ,block (it was January) to try and get the measurement to be consistent, but each time the same half of the shell was a bit tighter than the other side.

The needle didn't move at all on all mains so I know the crank is good. Talking with Mad, I think we got it down to cap distortion when tightened.
Click to expand...

Not necessarily true.
The needle likely isn't moving because the journal is being backed by the bearing, it's only indicating the OD of the journal.
To check if the crank is bent requires supporting the crank as if in v blocks, by removing the shells in the center, but pay attention closely

I have found not only 1, but all of them on the shelf likely to have this gem of a problem at a crank supplier, and it's possible you have it also. Could be same place in MN.
Engine in question had a tight spot, also binding near the center.
Supported by the end bearings the error was worst from 4th to 1st journal but still with very slight edge contact on the rear shell. Hmmm.
Supported by 4th and first journal showed all DEAD ON...except the rear journal was eccentric by more than the bearing clearance. Bingo.
The crankshaft was not properly set up on the grinder, and it's own counterweights were wobbling the crank eccentric while grinding.
The next 2 cranks had the same problem...

To be clear, it doesn't easily show up in that case because the rear bearing locates the journal and forces the rest of the crank to run around it.

Not saying you have the exact same problem for sure, but it's easy to check.

One major difference I'll point out is that I used a test indicator with a much wider sweep across the gauge.
Your 1" drop indicator is probably not sensitive enough to pick up this problem, as it only takes 1/2 of the clearance (plus the interference amount) to run an eccentric journal into the bearing.
You are looking for deviations from .0012-.0015" or so.
I also believe your crank clearance is too tight.
There are a few ways to correct this depending on what you find.
If you try to run it like this, the crank will self clearance itself

I will say that your pics suggest a distortion/out of round condition with the main caps.
You could have a bit of both, with the problems "finding each other"
M

Its a pretty length procedure lol. Generally speaking, ALOT of emphasis on keeping everything degreased, and dirt/lint free. I used panty hose on the journals to get the last little bit of small dust off, and kimwipes on the back of the shells and the block saddles. All these surfaces have to be clean and degreased.

All of my checking for bore clearance is done prior to assembly. Im not checking stuff once everything is degreased, except for the thrust.

All journals and bearing shells got plenty of assy lube. I set everything up on a table in order, and orientation next to the block as i was assembling, so i didnt have to think about it while actually assembling. I also did a couple of trial runs to make sure my rods and pistons were oriented correctly.

I wiped the cylinders down with ATF until i stopped seeing black/grey on the paper towel. Piston skirts got lube as i was assembling, and piston pin got generously lubed. This part varys for many people. Some people use oil, and some people like to dunk the piston with the piston rings in place.

Rods get installed one by one, and snugged down. Crank is rotated 360* each time to feed for any binding.

Repeat this till everything is in.

If you had 2 identicle precision vblocks you could put 1 on #1
and 1 under #5 and spin the crank.. But as 8 said your using
the wrong indicator anyway.. You would need a dovetail point
style with a small point .. like maybe a .06 ..the indicator imo
should be a .0001 ...

The V minimizes the Contact area..If you had a surface plate to do it on :eyebrow:

Easier would be if you can get a local tool shop to check
it between centers.. preferably on a o.d grinder ..
or not as good lathe.. I suspect that's unessary
8

To check between centers, you would need to know if it been ground in a machine located off the chamfers. The grinder's chucks often locate off the OD surfaces.
Not sure if you could easily clamp one into a lathe and tell the differences described above.
It's a bit of work getting the chucks and centers indicated in and you might still find deviations based on the grinding machine not using the same methods.
Besides, the rod journals are ground first because it moves the crank around some....the mains should be close to perfect being ground last and the finished dimension crept up on.
Looser clearances hide many evils
It does kind of suck to have to pre-engineer solutions for potential errors or incompetency ???

Another issue using V blocks supporting 1 and 5 is if there was a grinding problem as described earlier you might not isolate that.
You would still need to check 1 and 4.

8ad-f85 said:
Another issue using V blocks supporting 1 and 5 is if there was a grinding problem as described earlier you might not isolate that.
You would still need to check 1 and 4.
Click to expand...

This was a starting point .. I ass-u-me-d the rest is common sense.. not the best method anyhow..
Just throwing ideas around .. it would eliminate the bearing.. Given a surface plate you could easily
check that all journals were in the same plane