Anyone used one?&nbsp; I read all sorts of things like it retards 5* and 10* anyone know for sure?&nbsp; Which pin is the retard? And is it to ground? I assume its the outside one and the inner two are still the white and green like the 4 pins?&nbsp; Any issues with how long it stays grounded/ retarded?
K

Thats the one I remember, its also kinda expensive.&nbsp; I guess that makes sense since it was a 1 or 2 year thing.

Anyone know anything about this one?&nbsp; I see references to a knock sensor but cant find any other details.&nbsp; I found reference to it in early 80's trucks.&nbsp; This one came up under 85 GMC 1/2 ton 305.
http://www.napaonline.com/MasterPages/N ... rol+Module

Two of the links in the other thread no longer worked, so I modified those posts. The remaining link there is still good. Here it is:

I found this regarding the later 5 pin module.&nbsp; Anyone have any more info or manuals for that vintage stuff?

My 1983 Chevy van also has the vacuum advance and ESC. It is the RPO LE9 305 4 barrel. The computer can cause you problems when it is on the blink. Most early 80's 305 4 barrel engines have what is called ESC. The ESC uses a computer to control spark knock. The distributer advance mechanisms control the timing in the regular way, a signal is sent to the computer, then if knock is sensed it delays the switching of the Hei module. Uses a special 5 pin module. It also uses a vacuum switch to momentarily retard the timing when you put the pedal down. Had to be done to reduce the detonation of a high compression engine run o crappy fuel. You will not find this system used in conjunction with a CCC car(no computerized carb or fuel injection) Seems like this was only used on detonation prone engines between 1980 and 1986. Cars used it to 83, truck and vans to 86.
7

More bits from the net

According to my 1980 Pontiac FSM, the operation of the EMR module is part of the C4 Computer Controlled Cataytic Converter system.

1980 Pontiac FSM Page 6E-33, referring to Fig 6E-47 (which is only a picture of the ECM mounting in the car), reference only the 5.7L "R" (Olds) 350 V8.
"...The EMR module has the capability of retarding the engine timing 10 degrees during certain engine operations to reduce exhaust emissions. During other engine operations, the module functions the same as a standard HEI module. The terminal "R" on the module is connected to the ECM and retard is accomplished by an internal ground. The timing is retarded 10 degrees only when engine coolant temperature is between 19C (66F) and 54C (130F), with thottle opening position below 45% and the engine speed above 400 rpm...."

As I think I noted above, the car I snagged my EMR module was a 260 Olds V8 powered Cutlass, 1980. I got the vacuum switch as well, but could not determine it's operation, so I assumed it was defective. My guess would be OEM operation non ECM was strictly to reduce timing at high vacuum conditions to reduce N2 emissions. Being Pontiac didn't use the 260 (they were stuck with the Pontiac 265), I don't have any info on the 260 usage (anyone with an 1980 Olds FSM??). Being the 260 was a lower cost car, likely they were able to make it work ultra cheap with a vacuum switch only. If they got it certified, in 1980, ECM's weren't required yet. 1981, they were. And IIRC the 260 died in 1980, none in the 1981 model year.
S

The 1918 is for sure a much more common model.&nbsp; It appears the end result is the same?&nbsp; I wonder if they are triggered the same?&nbsp; Just cant seem to find much detail on that one so im suspicious why people only talk about the 1941.
7

Looking at that application link I see that it was used on the 78 Seville's.&nbsp; I do have a manual for those and it does explain it.&nbsp; I read it quickly and dont know if its useful or not, too much to think about this early.&nbsp; I will see if I can scan it later to get a few more brains working on it.&nbsp; &nbsp; I'm hoping its a cheap (junkyard) way to get some quick adjustment of timing with the flip of a switch.&nbsp; The 78 Seville was still the old analog EFI from 76 so what ever signal (if any) it was getting cant be that complicated.&nbsp; I also thought the 80's trucks had a very basic computer system, not the full system with full spark control the cars had at the time.&nbsp; There is a graph that shows both advanced and retarded timing.


Hmm. You may've seen this, but since this is sort of a parrallel thread, I'll link it. The fellow claims that there are three different 5 pin modules, all of which retard. Would be nice to know how each works:

Dave, it would be nice to know. I'm not sure there is much difference in them either, though there must be some difference for GM to use a different part.

We have numbers for 2 modules. Not sure how to find the 3rd. I'd suggest buying the cheap brand modules for testing, and stick them in an HEI dizzy on a running engine.
Route the extra pit out of the dizzy and monitor the timing at idle (or slightly above) w/o vacuum advance.

Check the timing with the wire open (not connected) than at 0V(ground). Might be worth making a variable voltage with a 10k pot (12V on one end, ground on the other end, and the wiper to the module pin). Slowly increase the voltage from 0 to 12 (in 0.5V increments) and check for timing changes.

I suspect the early module is a simple on/off function for the retard. But one of the later modules might have a variable retard based on voltage, or be designed for a 5V input instead of 12. One of the modules might expect a PWM signal, but it much harder to test that.

TJ,
I cannot find my Haynes manual, which I think covers that.
But some online looking shows that the controller looked at a knock sensor and a basic MAP sensor.
If it detected knock or manifold vacuum fell low enough (high throttle=low vacuum) it would trigger the fixed retard.
7

Lots of good info in that Ebay link&nbsp;

I never heard any good reasons for the differences in the coils and pickups before.&nbsp; I wonder what the starter location had to do with it?

73eldoconvert said:
Lots of good info in that Ebay link&nbsp;

I never heard any good reasons for the differences in the coils and pickups before.&nbsp; &nbsp;I wonder what the starter location had to do with it?
Click to expand...

I haven't a clue, but I'm dumb as dirt on such things. Interesting for sure.

Hey, can I offer a little info here.&nbsp; The difference in dizzy pick-up coils and ignition
coils has to do with the location of the starter, either left or right.&nbsp; The explanation
given is that it has to do with the location of the battery cable running to the starter.
Under starting conditions, it "can" induce electronic interference with the ignition.
This explains why the Toronado uses a different set-up from the RWD Oldsmobiles.&nbsp; Reversing the polarity of the two coils prevents the problem.&nbsp; So says Delco Remy.
On another subject, the correct five-pin module for our stuff would be the D-1941.
The CSOB way is to go out to a country junkyard and get a dizzy out of a 1981 V6
Chevy.&nbsp; And get as much of the wire as you can.&nbsp; The wire for that fifth pin is long
since discontinued.&nbsp; For $15 I got a genuine Delco module, plus a good coil and
rotor.&nbsp; The shaft in a Chevy is the same part as a Caddy and if you cnange the top
piece with the eight internal teeth, you have a good pick-up coil.&nbsp; Having the whole
dizzy shows you where to mill the slot for the grommet for the wire.&nbsp; All for $15.

gary kosier said:
On another subject, the correct five-pin module for our stuff would be the D-1941.
Click to expand...

You have some information that explains why the D1918 module wouldn't work?&nbsp; :scratchchin:
7

Based on the ACDELCO link this would be the 1918.&nbsp; Came from the 78 Cadillac Service manual and said it was standard on all Sevilles which was the multiport olds motor. 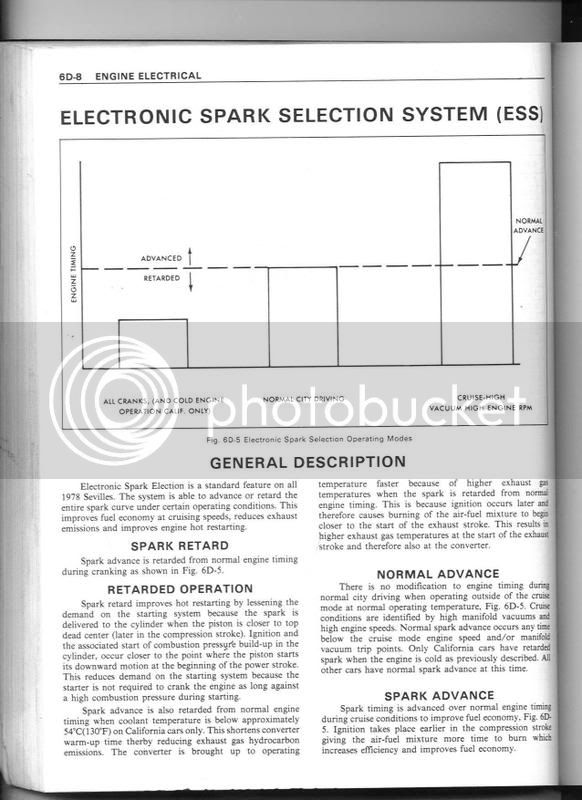 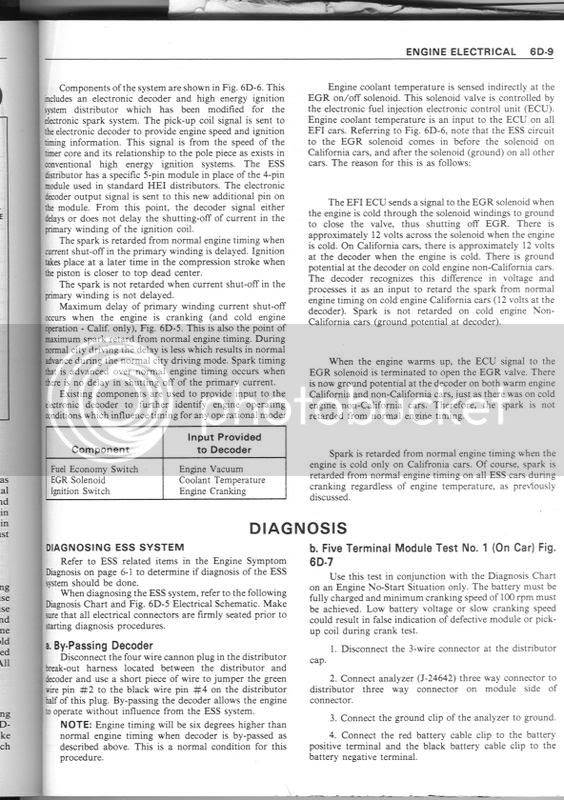 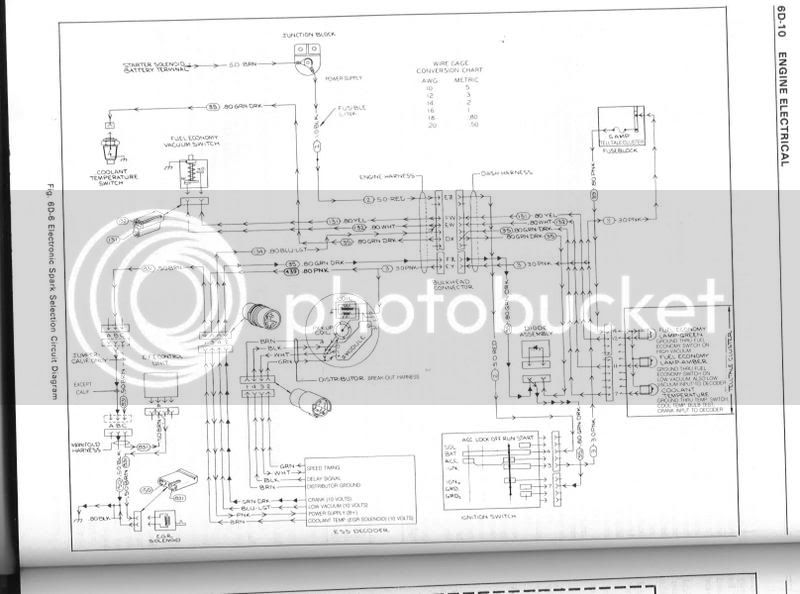 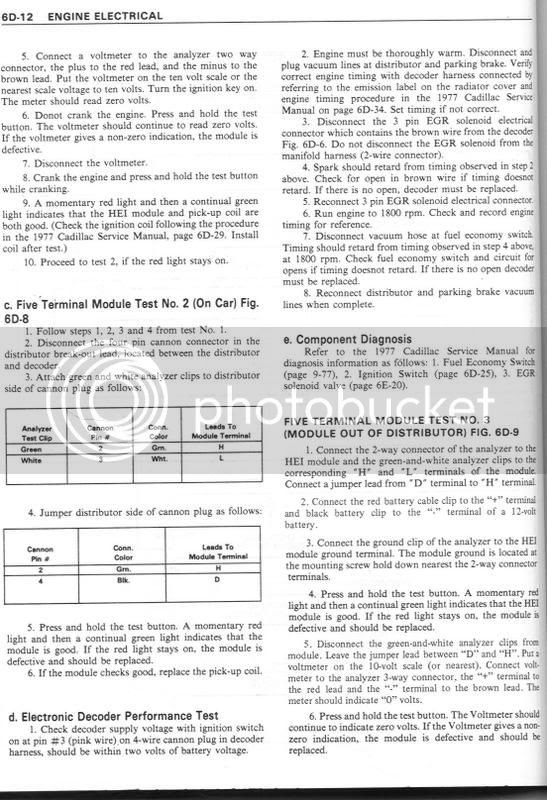 Typical of the later GM manuals. Use this magic tool (the analyser) with no indication if what it does or how.


But, from the description, it sounds like the D terminal is an extra control on the module and is a switching signal, nit a constant level.
Think it might be an open collector signal so that the external controller can hold the output high (or low) longer.

The schematic (figure 6D6) looks like the pickup wires go to the external controller too.
S

A little searching and I found some (possibly) useful info.

First is a document the discusses how the normal module works.
It reference a Motorola chip that is the primary control circuit. The data sheet for it is also attached.

The D pin on the D1918 module could control the the charging of the dwell cap and change when the trigger (G pin) trips the input of the Motorola chip.


I'm a bit tired to comprehend all of it right now.&nbsp; :worried:

Looks like some good info.&nbsp; Got about 1/2 way through the first one before my brain turned off, I will have to give it a go later when Im awake.&nbsp; With all this info it seems like we should be able to figure a cheap way to manipulate these things for various applications.&nbsp;
S

73eldoconvert said:
With all this info it seems like we should be able to figure a cheap way to manipulate these things for various applications.&nbsp;
Click to expand...