I'm looking for a new carburetor to my 1965 429 engine. I think about Edelbrock 1411. Anyone has it? Do I need any adapter to intake manifold?

Hey dude, I've got a Edelbrock 1406 on my 429. The guy that owned the car before me actually put it on, so unfortunately I don't know all the details. That being said, it bolts up with no adapter plate. The carb itself has two bolt patterns, so it doesn't look like you even have to do anything. As far as performance, it runs great. I'm no carb wizard like some guys, but I just make minor adjustments based on the season and it's good to go. Hope this helps!

Oh, and just out of curiosity, is there anything wrong with the Carter that's on there?

What vehicle(s) do you drive?
1964 Cadillac convertible

That's good information. My 1964 convertible with Carter has a stuck choke and needs 15 pumps to start, plus lags a bit at stop lights. I could rebuild the carb but I'm inclined to go with the Edelbrock 1406 if it bolts right on. I would think the electric choke would be better than the stock Carter with regulat choke.
P

The '65 Deville I had, used the Carter carb, which was fairly easy to take apart & clean etc, w/new gaskets etc.. Local auto store back then, said the Rochester carb was more common. Don't know what model that would have been, ..maybe a WCFB ?? Edelbrock is a Carter anyway, so except for occasional crappy quality c0ntrol, like metal filings in the float bowls etc, they seem to work OK

“…..My 1964 convertible with Carter has a stuck choke and needs 15 pumps to start, plus lags a bit at stop lights. I could rebuild the carb but I'm inclined to go with the Edelbrock 1406 if it bolts right on. I would think the electric choke would be better than the stock Carter with regulat choke……”

Over the last week and a half I’ve been playing with 61-66 Cadillac AFBs and from what I’ve come across “bolt on” might be a relative term. Some things you should probably look out for will include the following items:


Throttle plate size: Depending on the Carburator and manifold your car has you might find that the throttle plates on the Edelbrock are 2 large to open in the intake manifold. This will generally require a spacer with bores larger than the intake holes to space the carburator up above the smaller intake manifold holes. ……I just checked a 1406 I have on the shelf and it “likely” won’t be a problem.


Linkage: Depending on the year and transmission Cadillac used a variety of AFBs and brackets that bolted on to the carb and throttle arm. On manual kick down linkage cars a plate was bolted on the throttle linkage arm and that bracket was where the accelerator linkage and kick down rod connected to (this is something that will have to be addressed if using an Edelbrock). On the electric kick down cars a bracket and switch bolted to bosses on the rear of the carb (which are not on the Edelbrock carbs) and a bracket connected to the throttle arm to activate the switch.


Jetting: The 1406s are jetted primarily for a Chevy 350 and according to Edelbrocks web site….. “The 1406 is calibrated lean for fuel economy. In some applications, re-calibration of the carburetor may be necessary for optimum performance.” It’s pretty much guaranteed that you will need step rod and/or jet changes along with step rod spring changes.


Quality Control: I’ve bought several Edelbrock carbs for personal use over the years and worked on a lot more that belonged to customers. During that time I’ve had a few new out of the box carbs with loose discharge nozzles, loose venturies and incorrect float levels. The best one was the 750 Edelbrock where they installed a blank step rod (one that hadn’t had the steps cut into it). 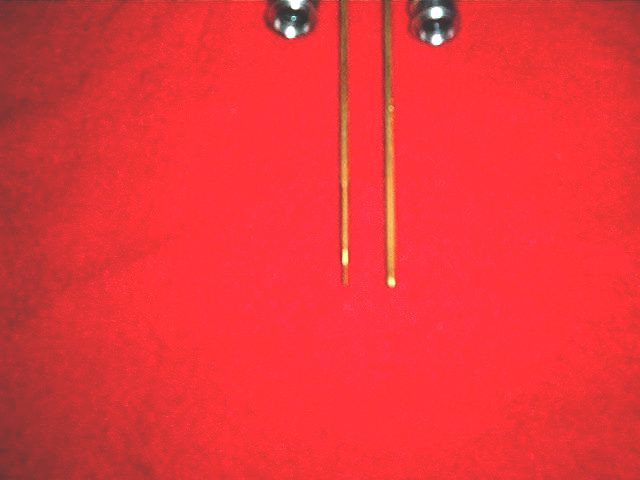 
It hasn’t been on every carb, but often enough I usually pull the cover off every new one I get and check them before installation.

Now as far as your original AFB. The stock choke sticking is pretty common especially when they use exhaust manifold heat to warm the choke. What happens is the little piston located under the choke housing carbons up and sticks in its bore. A couple shots of carb cleaner and working the linkage is usually all that is required to free it. I agree with converting to an electric choke. All that is required to convert your original choke to electric is an electric choke housing……it costs around $15.


These are the same as used on the Edelbrocks. Just remove the line that goes into the choke housing, and put a cap over the inlet where the line connected, install the electric choke cover, run a 12V wire and ground, adjust and your done.


If all you’re doing is the choke you’re done (you would have had to run the 12 volt wire for the Edelbrock anyway).


If the hesitation is caused by a stuck choke you’re good to go. If not rebuilding the carb is pretty simple and a rebuild kit will probably under $40 (locally…….. and under $30 on line).


Rebuilding and adding an electric choke to your original carb will run under $75 if you do it yourself and probably under $200 if you farm it out. Still way under the $325-$375 a new Edelbrock will run you……plus you won’t have the time and money involved in recalibrating the carb to your engine.

The prices I quoted are current, I did four Caddy AFBs over the last week. One to trade, one for the shelf and a pair for a set of Dual Quads. 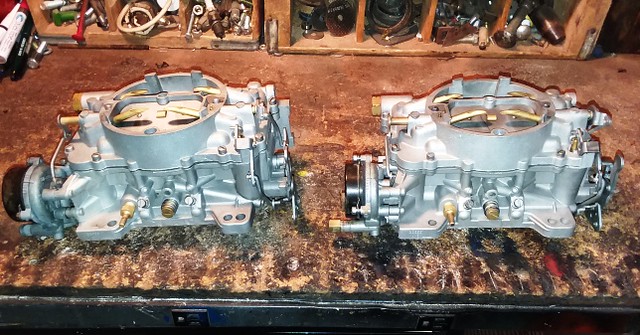 I agree it would probably be easier to do a simple refurbishing of the existing carb than trying to adapt a newer one to work with the ancillary parts like the kick-down.